Unfortunately, deselecting current item still doesn’t fix all issues. The problem with deselection is that it’s not handled correctly via QAccessibleTableCell: 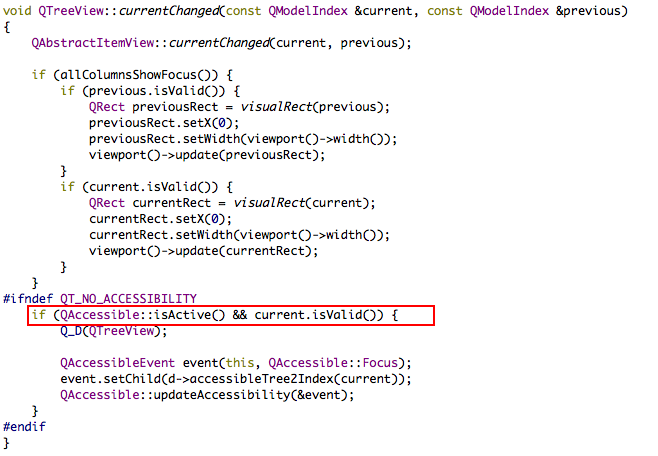 So there are two ways how to fix it. One is to manually set QAccessibleTableCell but I didn’t find a way how to do that. The second way is to disable QAccessible for Property editor. Unfortunately it’s not an easy task. In QAccessible exists method setActive:

But this method works only with AccessibleObserver class but not with QPlatformAcessibility which handles real QAcessible::isActive result. Because of this it’s necessary to update setActive method in file qacessible.cpp inside the Qt.

In case you will find better way how to turn off accessibility, please let me know.

But there is still one more problem. Occasionally OS X decides to switch accessible back on:

And this is probably the reason why everything works ok on older OS X but not on 10.10. Because OS X 10.10 randomly turns accessible on which causes this crash. Accessible is usually turned on when opening some modal dialog.

This explains why opening an empty dialog increased the probability to crash the application. The only solution I have found is to disable QAccessible every time the PropertyEditor is cleared up.

This is very interesting crash and I think it should be considered as Qt bug. This problem arise only under very special circumstances. But one after another.

You will identify this problem when your application stopped/exited immediately after the start without any visible error message. It looks like the application isn’t executed at all. When you check application log (Computer -> manage -> Event viewer -> Windows logs -> Application), you will see Error logs:

The most interesting part of this log is crash location: ntdll.dll

At first sight it seems like some problem inside the windows. But the opposite is true, the problem (as almost always) is inside your app ;-).

As the next step, you can try to debug this executable via Visual Studio to see what happens inside. Simply open executable as project together with .pdb files and execute it. Now you can see that application is correctly executed but crashes as soon as it touches Qt library. The location of crash is inside ntdll.dll in RtlHeapFree() function.

So the problem is inside the Qt, right? Almost true, but not for the 100%. When I tried to run this application on computers of my colleagues, everything works ok. So why the application doesn’t work on my computer too?

The problem is in new Qt5 plugin system. Besides the common Qt5*.dll files which are loaded immediately after the application start, Qt5 is also loading plugins/platform-plugins dynamically when the application is executed. To locate this plugins, Qt5 uses following method to identify directories where to search for plugins:

For some strange reason this library returns as first directory path where Qt5 libraries were compiled and after that location based on the executable. So if your Qt5 path is C:\Qt5, this will be the first path where all plugins are searched for, no matter if the correct version of plugin is located in APP\plugins or APP\platforms. I think this is serious bug in Qt5.

Where is the problem?

And here we’re getting to the core of the whole problem.

If application is compiled on computer with one compiler and used on second  computer which contains the same path to which original computer has installed Qt, the application will load all plugins from your folder instead of itself folder.

Unfortunately it isn’t possible to simply change this behavior from your app. All of these operations happen directly in QCoreApplication constructor so if you try to change it after, it’s too late.

It’s not a nice solution, but it works. I tried  to report this issue also to bugreports.QtProject, so maybe in later version this will be fixed.

Our reporting tool occasional crashed on MacOs when was executed with several command line params. Command looked like this:

After some google-searching I found out that the problem is in core of our application. When subclassing Qt QApplication, it’s necessary to pass argc with reference, not by value. So after adding one little &, everything works like charm!